What stops do I use? Part 2, Principal Chorus, Strings, Flutes 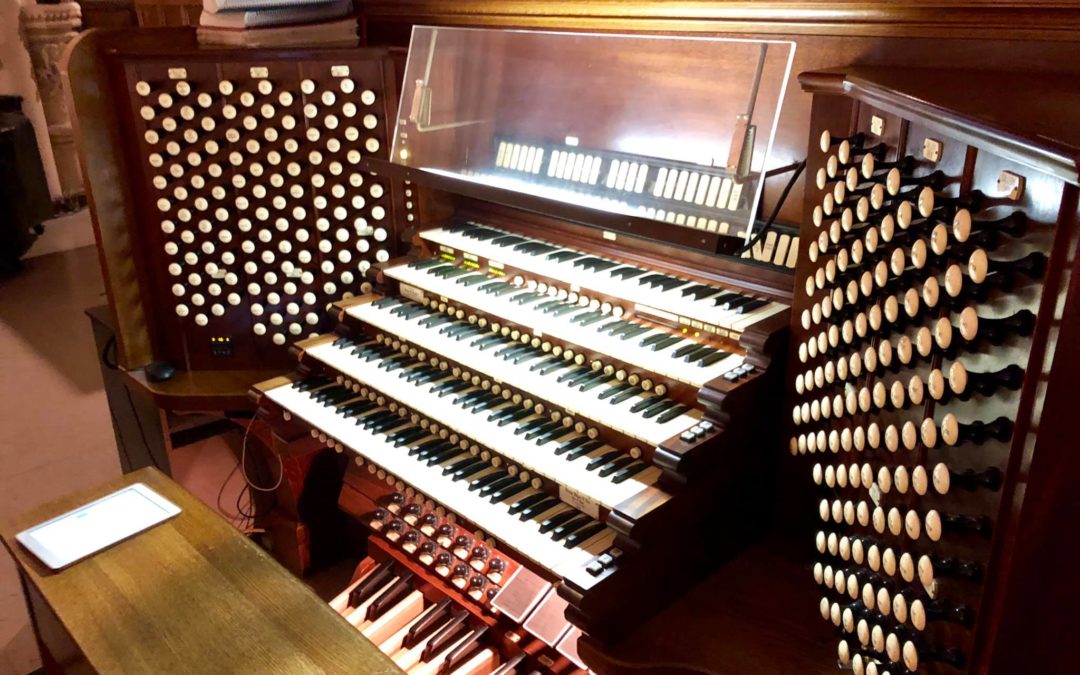 The easy part about this post is that there’s so much good information out there, and I can just point you in the right direction. The above bullets are points that Jennifer Budziak recommended that I talk about, for people who would like to learn more about registering the organ. So I’ll talk mostly about the basic sound groups on the organ in this post and leave the reeds for later.

In many ways the organ has similarities to an orchestra, with sounds that are named for, and sound like, orchestral instruments. The strings and flutes and reeds, for example, are built to sound as much like their orchestral counterpart as is lovely and right according to the organbuilder’s concept of the instrument. However, the foundation of the organ itself is built on an entire set of ranks called the principal chorus. (And here let me clarify that a rank refers to an entire row of pipes on the keyboard or pedalboard, so a Principal 8′, with 61 pipes, comprises one rank of pipes. A Principal 16′ in the pedal would have 32 pipes, one for each pedal.)

Here is a good explanation of principal stops, by Patrick J. Murphy and Associates Organbuilders. Once you can identify what the principal stops are on the instrument you are using, then you know how to pull out the principal chorus, which basically means one of each pitch level drawn and used together. Since the principal stops are the core of the instrument, then pulling them all together is the intention for certain kinds of repertoire, frequently in Baroque music, especially in Bach and Buxtehude. It is most common for a large pipe organ to have, on the Great, a Principal 16′, Principal 8′, Octave 4′, Quint 2 2’3, Octave 2′ and Mixture. Pulling all these stops at once is the principal chorus, also called the plenum, or organo pleno. Depending on the sound and volume you are after, you might not use the 16′, or the 2 2/3, so using the 8′, 4′, 2′ and Mixture is also acceptable.

If you are sitting at a console and aren’t sure which are the principals, there are two easy ways to figure it out. First, you can use your phone to Google the stop names in front of you to see what family of pipes they fall into. Second, stop tabs are always put in a certain order. When the stop tabs are in a row under the music rack, then from left to right the principals are first, followed by flutes and strings. Then that same order starts over at the next pitch level. On an instrument with stops that are vertical, on either side of the console rather than horizontal (such as the photo at the head of this post), the principals will be at the bottom, and the next row up will be a flute, then a string, and then it will start over. In that formation stops are placed in two or three rows, but if you look at the order carefully, you will see that they are laid out in such a way that it is easy to figure out the order. Keep in mind there can be exceptions, so when all else fails, Ask a Question!

The next main manual, the Swell, will also have a principal chorus. The Swell will start with a Principal 8′, and will (usually) have a 4′, a 2′ and a Mixture, depending on how much room is available in the organ chamber.

The next manual, if there is one, is the Choir or Positiv, and it will usually not have a Principal 8′ but will start with a Principal 4′. That means that the 8′ foundation pitches used in the Choir will be Flutes or lighter String stops.

But, all of this is subject to the available space in the church or hall, and the artistic vision of the organbuilder. For now, if you know that the Principal Chorus is made up of members of the same pipe family, and you learn how to use them together and how to mix them with other pipes, that’s a good start. In general, using the entire chorus together is for Baroque pieces that call for the entire plenum, but a skilled organbuilder also knows how to voice the principals so they can be used alone and in various combinations and in all kinds of repertoire.

The flute stops come in a lot of varieties, and are among the sweetest and loveliest stops available. Some of them are for ensemble use, and some make good solo stops. When accompanying a choir it’s good to combine various 8′ flute stops with some sprinkling of light string 8′ stops, which I will talk about next. A future post will describe how to combine stops from different manuals, but here I’m just talking basically about what the stops are and how you use them.

Read here for a definition of string pipes in general. Then, there are the strings, which produce a shimmering sound, much like the sound of a section of violins playing together. For this sound the builder takes one of the string ranks, most frequently in the Swell, and uses another rank of pipes next to it (which is not used for anything else) and tunes it slightly sharp. (It is called a celeste.) When you draw both stops at the same time the beat between the ranks causes a lovely, undulating sound. On bigger organs a flute stop may also have its own celeste. The celeste should not be drawn for anything else other than its partner rank, but that other rank can be used alone or in other combinations.

For more information on organ pipes, see John-Paul Buzard’s post on Organ Construction. Stop back for my next post, a discussion about Couplers – What They Are and When to Use Them!